When We Was Rad: Skateboard History from UK Vintage Magazine 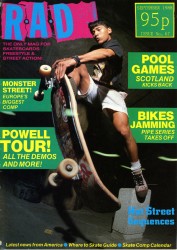 Time for a look at 1988… Flipping through the year, this cover caught my eye as redolent of the time. The Powell Tours help defined that era and provided a focal point in an age before stadium skateboarding even seemed a possibility. But I note now that one of the cover lines reads “hot street sequences” and the Munster competition coverage is advertised as “Monster Street”, suggesting that the rise of street skating was well and truly under way. There’s BMX coverage in this issue as well and, perhaps best of all for me, a big report on a sunny pool party at Livingston skatepark.

The cover picture also makes me smile. I can remember that very well indeed. We were all down at the South Bank with the Powell Team in one of their semi-off-duty moments. I was trying to take pictures and having a real struggle with the conflict between trying not to intrude but also cope with the challenges of the gloom while trying to keep an eye out for who was doing what and where.

Then Dobie wandered over, “lend us your camera, Tim”. So I gave it to him. He sidled over to one of the little pillars, took this one picture of Caballero, gave me back the camera and carried on just hanging out.

Well, that’s how I remember it. Perhaps he actually took a couple of shots. But in my memory Dobie had spotted what was about to happen, wandered over to the exact spot, taken the single shot with a borrowed camera and then given the camera back knowing that he’d got the best shot of the day. Meanwhile I carried on sweating away, working at it until everyone had stopped skating.

By the way, if you like this, you might well want to take a look at Steve Caballero’s blog.